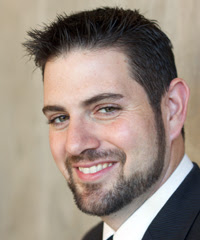 Jason is a regular member of the Lone Star Wind Orchestra (Richardson, TX) which recently performed at the Midwest Clinic under the baton of Eugene Corporon and Leonard Slatkin.  He is also a member of the Bell Street 4 trombone quartet and performs with them at high schools, universities and conventions throughout the southwest.

For more information on Jason and his new position, please visit:
http://www.missouristate.edu/music/jhausback.aspx

Posted by Ian Melrose at 9:01 PM No comments:

People know me as: Tom Buchhauser, a music educator for more than 50 years and longtime associate music conductor for the Wisconsin Youth Symphony Orchestra, just starting my final season with WYSO. People call me Tom but some of my colleagues at Memorial High School called me Bucky. The kids always called me Mr. B. I used to tell them they could call me anything as long as there was a Mr. in front of it. That brought some twinkle to their eyes. 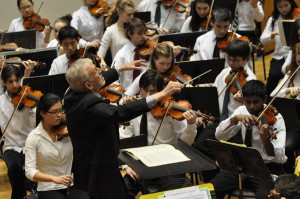 Coming up next: The first WYSO concerts of the year are on Nov. 18 in Mills Hall in the UW-Madison Humanities Building, 455 N. Park St. The Sinfonietta and Concert orchestras will perform at 1:30 p.m. The Philharmonia Orchestra, which I conduct, and the Percussion Ensemble will be at 4 p.m., and the Harp Ensemble and Youth Orchestra will play at 7 p.m. Tickets are $10 for adults, $5 for youth 18 and under, available at the door. For more information call WYSO at 608-263-3320.
Don’t miss it because: You will be amazed at the skill and musicianship these 9- to 18-year-olds bring to the music. This would not be possible without the outstanding training the students are receiving in music programs in the public and private schools throughout Wisconsin. The students give up 33 Saturdays each year because of their desire to make music with other dedicated musicians from many communities in southern Wisconsin.
Your training: I started piano lessons at age 5 with a neighborhood lady and then took lessons at the Chicago Musical College. When I entered Lane Tech High School, I majored in music so I didn’t have to take the shop classes. My future was to be a math teacher, and then I started the cello. By my junior year I changed my plans to becoming a music teacher. I received my bachelor’s of music from the UW School of Music in 1962 and my master’s of music in 1964. I taught at Wisconsin High School in 1962, Central High from 1963-66 and Memorial from 1966-99.
Most inspiring moment on stage: As a cellist, I think it was when I was a UW student when the symphony orchestra and massed choirs performed the Brahms Requiem and the Symphony of Psalms by Stravinsky at the UW Stock Pavilion. Robert Shaw was the guest conductor. After the concert I just wanted to be alone and think about that awesome experience.
As a conductor, it has to be when the Memorial Symphony Orchestra and Concert Choir performed the Ernest Bloch Sacred Service in 1976. Professor Sam Jones was our cantor and Rabbi Manfred Swarsensky was the narrator. There wasn’t an empty seat in the auditorium. I still listen to that performance today because it was so thrilling.
Who inspires you? I have had many wonderful teachers who have shaped my life, but it is Marvin Rabin who has been my greatest inspiration as a music educator and conductor. For the past 47 years, Marvin has been my teacher, supporter and critic, and my resource for string development and repertoire. His coming to Madison in 1966 to start WYSO changed my whole life.
What’s next for you? As of now I have no special plans. I am looking forward to this last year with WYSO. After 51 years of teaching and conducting young people, I am sure I will continue to be involved in some way promoting music education and will continue working on music committees and boards.